got this from Melissa Groo, who does Save the Elephants’ daily roundup of new stories about elephants around the world. Melissa (who is also a phenomenal bird photographer. we spent the last week of March on the Platte River in Nebraska where 600,000 sandhill cranes were doing their dances and fueling up for the trip north to their nesting grounds) spent two three month seasons in the early 2000s at Dzanga Bai, assisting Katy Payne, who was recording the ultrasound communications among its forest elephants, so she is as shattered as I to learn that what we have been dreading ever since the Central African Republic exploded and the Seleka rebels have been raping and pillaging and killing has come to pass. It was inevitable that they would find out about the elephants in the bai, all that ivory free for the taking. And so what to me was the most magical Eden I have ever been to in my fifty-five years of world traveling is gone. I described it at the end of my 2011 Vanity Fair piece, “Agony and Ivory,” (see Dispatch 69), and Guillaume Bonn photographed the elephants in the bai. I feel like it was I, or my family, who was slaughtered. Paradise lost, Melissa emailed. Among the photos that keep rotating on the title page of this site is a snap I took in the bai of Juno 2 and her daughter. Juno 2 was the most beautiful elephant I have ever seen, the Cleopatra of elephants, slender with perfect ears and pink-tipped trunk and feet. Of course this was from a human point of view. I hope she and her daughter weren’t in the bai when the 17 Seleka armed with AK 47’s arrived  and started mowing down the ones in the clearing from the observation platform. Fortunately, Andrea Turkalo, the noble woman who had been watching and watching over the elephants in the bai since l990 (she was able to identify 4000 individual elephants) got out before the Seleka came. Here’s the story :

Poachers have entered one of Africa’s most unique elephant habitats on Monday, threatening to cause an elephant massacre. Posted on 07 May 2013 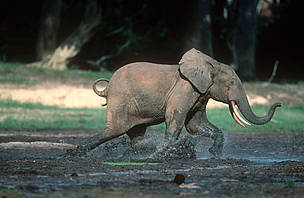 Poachers have entered one of Africa’s most unique elephant habitats on Monday, threatening to cause one of the biggest elephant massacres in the region since poachers killed at least 300 elephants for their ivory in Cameroon’s Bouba N’Djida National Park in February 2012.

According to WWF sources, a group of 17 armed individuals on Monday entered the Dzanga-Ndoki National Park and headed for the Dzanga Bai, locally known as the “village of elephants”, a large clearing where between 50 and 200 elephants congregate every day to drink mineral salts present in the sands.

Two WWF-supported local researchers said that three members of this group armed with Kalashnikov rifles approached them in the forest on Monday, asking for food and directions to the viewing tower at the Dzanga Bai, which is used by scientists and tourists to observe elephants. After giving a false lead, these sources immediately ran away and heard gunshots coming from the Bai on their way into hiding.

Also on Monday, two ecoguards said they saw they saw armed individuals on the Dzanga Bai observation platform shooting in the direction of elephants. While going into hiding, these sources said they saw the vehicle which had transported the 17 gunmen parked at the entrance of the park.

WWF calls on the international community to help restore peace and order in the Central African Republic, which has been rocked by violence and chaos since the beginning of the year, and to help preserve this unique World Heritage Site.

“Unless swift and decisive action is taken, it appears highly likely that poachers will take advantage of the chaos and instability of the country to slaughter the elephants living in this unique World Heritage Site.

“Wildlife crime is not only a consequence of instability, but a cause. It fuels violence in the region, in a vicious circle that undermines the stability of these countries and their economic development..

“We also urge Cameroon and Republic of Congo to provide support to the Central African Republic in preserving this World Heritage Site, which not only encompasses the Bai, but also includes large neighbouring areas of these two countries.

“Finally, ivory consumer country governments, and notably China and Thailand, must redouble their efforts to end demand – the root cause of the extermination of elephants across Africa.”

One thought on “sickening news for forest elephants”

Copyright © 2001-2023 Dispatches From The Vanishing World. All Rights Reserved.Another website by DMA