I was talking about this the other day with a long-time conservationist. Sandy, a monster hurricane whipped up by human emissions, makes a direct hit on Gotham. What more do you want to make the message clear that global warming is here and it’s real and it’s us ? But what do New Yorkers do ? Clean up and repair the damage and put it behind them, like the horror of 9/11. And Sandy is the climax of a year in which some 33,000 heat records are shattered around the country. There a big new report on the many ways global warming is changing U.S. Daily. Here’s some press on it :

A special panel of scientists convened by the government issued Friday a 1,146-page draft report that details in dozens of ways how climate change is already disrupting the health, homes and other facets of daily American life. It warns that those disruptions will increase in the future.

“Climate change affects everything that you do,” said report co-author Susan Cutter, director of the Hazards and Vulnerability Research Institute at the University of South Carolina. “It affects where you live, where you work and where you play and the infrastructure that you need to do all these things. It’s more than just the polar bears.”

The blunt report takes a global environmental issue and explains what it means for different U.S. regions, for various sectors of the economy and for future generations.

The National Climate Assessment doesn’t say what should be done about global warming. White House science adviser John Holdren writes that it will help leaders, regulators, city planners and even farmers figure out what to do to cope with coming changes.

And climate change is more than hotter temperatures, the report said.

“Human-induced climate change means much more than just hotter weather,” the report says, listing rising-seas, downpours, melting glaciers and permafrost, and worsening storms. “These changes and other climatic changes have affected and will continue to affect human health, water supply, agriculture, transportation, energy, and many other aspects of society.”

The report uses the word “threat” or variations of it 198 times and versions of the word “disrupt” another 120 times.

If someone were to list every aspect of life changed or likely to be altered from global warming, it would easily be more than 100, said two of the report’s authors.

The report, written by team of 240 scientists, is required every four years by law. The first report was written in 2000. No report was issued while George W. Bush was president. The next one came out in 2009. This report, paid for by the federal government, is still a draft and not officially a government report yet. Officials are seeking public comments for the next three months.

“There is so much that is already happening today,” said study co-author Katharine Hayhoe, director of the Climate Science Center at Texas Tech University. “This is no longer a future issue. It’s an issue that is staring us in the face today”

This version of the report is far more blunt and confident in its assessments than previous ones, Hayhoe said: “The bluntness reflects the increasing confidence we have” in the science and day-to-day realities of climate change.

The report emphasizes that man-made global warming is doing more than just altering the environment we live in, it’s a threat to our bodies, homes, offices, roads, airports, power plants, water systems and farms.

“Climate change and its impacts threaten the well-being of urban residents in all 13 regions of the U.S.,” the report said. “Essential local and regional infrastructure systems such as water, energy supply, and transportation will increasingly be compromised by interrelated climate change impacts.”

For example, the report details 13 airports that have runways that could be inundated by rising sea level. It mentions that thawing Alaskan ground means 50 percent less time to drill for oil. And overall it says up to $6.1 billion in repairs need to be made to Alaskan roads, pipelines, sewer systems, buildings and airports to keep up with global warming.

Sewer systems across America may overflow more, causing damages and fouling lakes and waterways because of climate change, the report said. The sewer overflows into Lake Michigan alone will more than double by the year 2100, the report said.

While warmer weather may help some crops, others will be hurt because of “weeds, diseases, insect pests and other climate change-induced stresses,” the report said. It said weeds like kudzu do better with warmer weather and are far more likely to spread north.

“Several populations – including children, the elderly, the sick, the poor, tribes and other indigenous people – are especially vulnerable to one or more aspects of climate change,” the report said.

And yet many Americans still don’t get it. They’re like ostriches sticking their heads in the sand in the currently broiling outback down under. Like alcoholics who keep on drinking even though they know it is killing them. We’re not a stupid people. What’s going on here ? I ask the conservationist, and he says there a video on Youtube of Bill Moyers talking with a guy who has the American population broken down to 15% believers in global warming, 15% non-believers, and the rest not sure, don’t know and don’t care, etc.. The deniers are largely religious fundamentalists who are heavily subsidized by the Republicans, who want to cast doubt on global warming as long as possible, so they can keep getting rich from burning  fossil fuel. Just like the tobacco industry, I say. The social psychology of this societal denial is also very interesting. The lines in Genesis that it’s all there for us, the foules of the air, the fish in the sea, to conquer and consume so we can be fruitful and multiply. The idea that won the West that a tree that’s left standing, a river that isn’t dammed, wasting the asset. Also, as T.S. Eliot put it, “humankind cannot bear too much reality.” That could be in play. And just plain ignorance. That’s an underacknowledged factor in the behavior of many cultures. For many people, the whole notion that we are slowly roasting in a microwave of our own making is overwhelming, for others it is still too hypothetical– the memory of an extreme event, most of which only last a week or so– is too short for the implications to sink in. Others suffer from disaster fatigue, which causes us to shut down on all kinds of large-scale horrors, the ethnocide of Tibet and the  continuing destruction of rainforests around the world being  ready examples. We know about these things, we tried to do something about them, but they’re still going on and there’s nothing we can do about them, so we stop caring and focus on contributing in our local community or whatever, something with more tangible results.

The basic concept of the greenhouse effect is not rocket science : putting all this carbon dioxide and methane is trapping the solar radiation reflected off the earth and heating up the atmosphere, and when you heat  the atmosphere as we’re doing with all the factory and power plant and exhaust fumes and forest fire smoke we’re pouring up into it is like heating water : it becomes more turbulent. Hence the increasing frequency and intensity of extreme weather events. Australia is currently a blast furnace, with temperatures of 105-110 degrees and fires like it’s never seen. Brook Thorpe, our intrepid Kiwi intern who got Last Look Books off the ground and did all kinds of other great things for DVW, emailed on Jan. from Sydney, where he is working for a conference and event-management company :
“The hair feels so thick, and heavy above 40 degrees Celsius (which it passed yesterday in Sydney) its almost hard to breathe. Record setting temperatures of 50 degrees are being recorded in central australia,  fueling fires in some parts (tasmania, and victoria). A relative told me, three of her friends lost their  houses in Tasmania to the fires. Walking home from work in the overwhelming heat  on Tuesday( in sydney), I couldn’t help but wonder :  so this is what “climate change” feels like?  I hope not, its quite uncomfortable for people like me ( without an aircon). Although. The heat  didn’t stop the tennis players in (some competiton) poor buggers!”

The Amazon, the dehydration of the rainforest by the El Nino-like warming event in the tropical North Atlantic and its degradation and savannification, the subject of my 2007 Vanity Fair piece ( Dispatch #41: The Dehydration of the Amazon Rainforest Part1 [1] and Part 2), [2]is already happening. Here’s an article in the Guardian :

Rainforest area twice the size of California experiencing drought rate that is unprecedented in a century, study shows 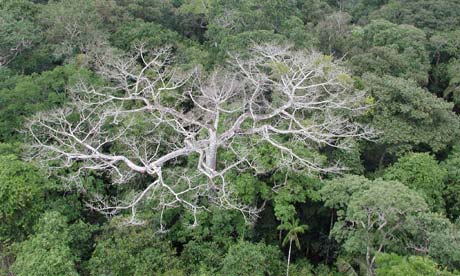 The megadrought in the Amazon rainforest during the summer of 2005 caused widespread damage and die-offs to trees, as depicted in this photo taken in western Amazonia in Brazil. Photograph: JPL-Caltech/Nasa

The US space agency Nasa [5] warned this week that the Amazon rainforest [6] may be showing the first signs of large-scale degradation due to climate change [7].

A team of scientists led by the agency found that an area twice the size of California continues to suffer from a mega-drought [8] that began eight years ago.

The new study [9] shows the severe dry spell in 2005 [10] caused far wider damage than previously estimated and its impact persisted longer than expected until an even harsher drought in 2010 [11].

With little time for the trees to recover between what the authors describe as a “double whammy”, 70m hectares of forest have been severely affected, the analysis of 10 years of satellite microwave radar data revealed.

The data showed a widespread change in the canopy due to the dieback of branches, especially among the older, larger trees that are most vulnerable because they provide the shelter for other vegetation.

“We had expected the forest canopy to bounce back after a year with a new flush of leaf growth, but the damage appeared to persist right up to the subsequent drought in 2010,” said study co-author Yadvinder Malhi of Oxford University.

The Amazon is experiencing a drought rate that is unprecedented in a century, said the agency. Even before 2005, water [12] availability had been shrinking steadily for more than 10 years, which made the trees more vulnerable. Between 2005 and 2010, localised dry spells added to the problem.

“This may alter the structure and function of Amazonian rainforest ecosystems,” he warned.

Nasa has been monitoring the Amazon for more than 40 years. Images it released last year [13] showed the dramatic impacts of man-made deforestation [14] over that period.

Although the speed of forest clearance has slowed [15], the Amazon continues to shrink in area. The latest study suggests the quality as well as the quantity of forest is declining due to extreme climate conditions. 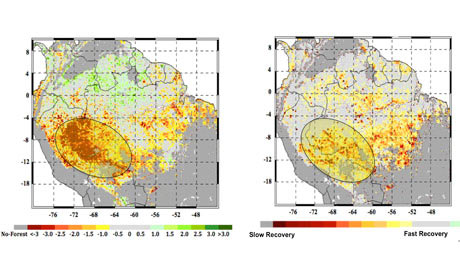 At left, the extent of the 2005 megadrought in the western Amazon rainforests during the summer months of June, July and August as measured by Nasa satellites. The most impacted areas are shown in shades of red and yellow. The circled area in the right panel shows the extent of the forests that experienced slow recovery from the 2005 drought, with areas in red and yellow shades experiencing the slowest recovery. Photograph: GSFC/JPL-Caltech/Nasa

And so global warming and its denial continue, with ever more ghastly effects. As Paul Ehrlich, one of the first scientists to raise the alarm about what we are doing to our earthly home, is fond of saying, denial ain’t just a river in Egypt.